Tochi Osuji was born in Toronto, Canada in 1984. The son of African immigrants, Tochi grew up between Canada, Nigeria and Saudi Arabia. He has also travelled to several countries in Europe and Asia, which gave him an early fascination with religion and culture. Eventually, he settled in Toronto to attend Ryerson University, where he majored in Radio & Television Arts. “Pond” is Tochi’s debut film.

The idea for Pond came to me while on a recent trip to Nigeria. I felt constantly bombarded with religion in a country that needs to focus on tangible solutions rather than waste time and resources on such institutions. I wanted to make a film to support nonbelievers especially my Black and Latino people. We are among the hardest hit by religion, which makes our journeys especially challenging.

Ultimately, I have a lot of love for believers. They are my family, friends, etc. I think beliefs shouldn’t distract us from resolving essential problems. 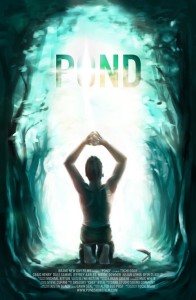 In this martial arts drama set in 1800 Upper Canada, two slaves jeopardize their escape to baptize themselves.